Areas and Localities in Fatehgarh 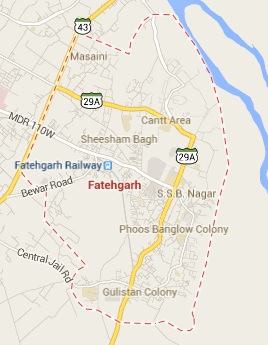 The administrative headquarters Fatehgarh has about 11 main localities out of which the major military and government establishments are located in the Cantt area and Phoos Banglow Colony. Most of its localities are sites near the banks of river Ganges and most of the localities lie close to the state highways 29 and 29A or the highway passes through the locality which facilitates the transportation of the area. The state government, the local self-government and the cantonment board are in charge of the maintenance and sanitation of these localities.

The cantonment city Fatehgarh in Uttar Pradesh has major military establishment which operate in the cantt area which is located on the banks of river Ganges. The state highway UP SH 29A runs in the middle of the locality, the other important roads that runs through the Cantt area are the Cantt road, Army school road, Loco road, Rani Ghat road, Kant road, Karnal ganj road and MDR 110W. Major city government and government authorised agencies like the Military area, Gun factory, Post office, RTO office, Customs & Central excise office, cemetery, Rajput Canteen, Shiv Mandhir, Telephone colony and many banks operates here.

The Phoos Banglow colony located close to the Kanpur road on the State highway 29A in the city operates major administrative departments of the city and the district like the CJM office, Nehru stadium, Ramchandra Dharamshala, Superintendent of police office, district supply officer office, City magistrate office, district magistrate office, ADM office and the Officers club. Major roads that run through the locality are the MIC road, Zila Parishad road, Gwal Toli and the Jafri Mohalla road.

The PWD colony located close to the state highway 29A operates banks like the Cooperative Punjab, national bank, central bank, bank of India, hospitals like the district hospital, Shri Ji hospital and other agencies like the Hathikhana, Asian paint shop, Fatehgark Kotwali. Major roads that run through the locality are the Hathi Khana road, Jai Narayana Verma road, Bhusa Mandi road and the State bank road.

Sheesham bagh is located on the state highway UP SH 29A next to Cantt area. Major roads that run through this locality are the Loco-Karnal ganj road, Karnal ganj road and the Loco road. Some of the important establishments in this locality are the Fatehgarh power house or the Bijli ghar, Tiwari nursing home, Meriladliradhe infotech, Muslim Kabristan, Mascot sales and services pvt ltd and the Gupta agency.

The SSB Nagar in Fatehgarh is located between the state highway UP SH 29A and the banks of river Ganges. The district judge resides in this locality. Major roadways of the area are the Judge Colony road, Machali Tola Gali and the Bargadia Ghat road. The Cantt road also runs through the area connecting SSB Nagar with the adjacent localities like civil lines, Cantt area and Phoos Banglow Colony. Fatehgarh bus station and Bank of Baroda branch are locates here.

The Gulistan colony lies next to civil lines very close to Ganges banks, through this locality the state highway UP SH 29A passes. The district jail is located in this area. Kutra plant nursery of Gulistan Colony is known for its enormous varieties of plants and herbs; it is sited on the state highway road. Major roads that runs through the locality are the locality are the Rakhs road, police line road and the central jail road.

Other Localities in Fatehgarh

The Sainik colony operates major establishments like the Fatehgarh railway station, Micron technology, Dental revolution clinic, Shekhar book depot and Gamadevi Mandhir. Masaini and Nagla Pital are located next to each other exactly where the state highways UP SH 29 and UP SH 29A interconnect. The locality Bholepur located on the state highway UP SH 29 has establishments like the ICICI bank, Best way, Electricity power station and the government hospital.