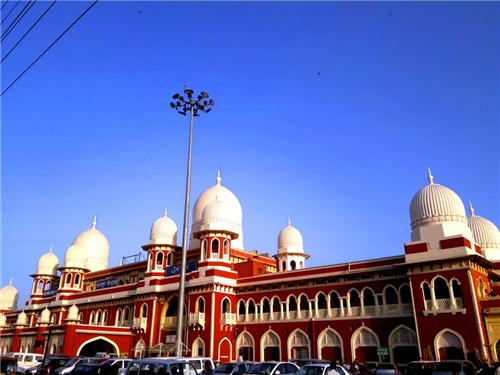 Click here for Kanpur City Guide
Fatehgarh city comes under the Kanpur division and it is one of the closest cities sited near this city of Uttar Pradesh . The Jain Glass Temple attracts a large number of tourists from Fatehgarh to view the marvellous Indian architecture of the mandir which is ornamented with glass and enamel. The two big annual fairs organised in Syed Badiuddin Zinda Shah Madar at Makanpur brings in an enormous crowd. The Siddha devi and Siddhnath temples in the mound of Jajmau also attracts tourists. The other important tourist destinations of Kanpur are Shri Radhakrishna Temple, Allen Forest Zoo, beautiful Kamla Retreat, Phool Bagh near Kamla retreat, Nana Rao Park and the Kanpur memorial church or the All soul’s cathedral. Kanpur is popular for its leather products, apart from which the city has shopping markets and malls to attract its tourist.

Fatehgarh and Kanpur are located at a distance of 132 km apart from each other. Kanpur can be reached from Fatehgarh railway station through Kalindi Express (14724) through the Fatehgarh-Kanpur Anwarganj branch line. The train transport will take about 2hrs 45 mins to reach. This is the shortest route to reach the city at a less coast of about 105 rupees whereas through road by car it will cost about 1904 rupees with 2hrs 43min journey.

Lucknow is situated at a distance of 205 km from Fatehgarh. The Mathura Chhapra Express (15108) aid to reach the city in about four hour whereas the city can be reached through roadways in about 3hrs 25 minutes.

Agra is visited by lakhs of tourist every year to have a glimpse of the majestic Taj Mahal which portrays the love of King Shah Jahan for his wife Queen Mumtaz Mahal. Taj Mahal on the banks of River Yamuna is one of the excellent examples for Mughal architecture. The Emperor Akbar museum cum monument Sikandra combines the architectural style of Hindu and Muslim. Agra Fort built by Emperor Akbar also one of the finest example of Mughal architecture. Other important tourist centres in the city are Chini Ka Rauza, Taj nature walk, Samadh of Somiji Maharaj, Ram bagh, Mehtah bagh, Itimad-ud-Daula’s tomb, Mariyan’s tomb and many other pilgrim centres. Agra is popular for shopping handicrafts; the city has many shopping complexes, malls and emporia.

Agra is located at a distance of 190 km from Fatehgarh. Two-way transport is used to reach the city. From Fatehgarh through roadways Mainpuri has to be reached from where UPSRTC bus service reaches you to Agra at a total of less than 5 hour journey which the shortest travelling duration possible to reach Agra. Another way is to reach Etawah through roadways and from where Agra can be reached through Lucknow Agra intercity (12179) in a total of about 5 hour 12 mins.

The holy land Vrindavan is the birth place of Lord Krishna; this is where Lord Krishna spends his childhood. The ruin of Kans Qila on the banks of river Yamuna, the red stone building of Sati Burj on the right bank of river Yamuna are the popular tourist interest in the city apart from many pilgrim centres. A large number of tourist visits the town for its festivals and fairs.

Mathura is a land of temples as it said to the birth place of Lord Krishna as per many Hindu scriptures. The city invites a large number of devotees and tourist every festive season. Popular pilgrim centres of the city were Kesava Deo temple, Shri Jagannath Temple Bhuteshwar Mathura, Vishram Ghat, Birla Mandir, Shri Krishna Janmabhoomi, Mathura Museum, Iskcon Temple and Naam yog Sadhna Mandir.

Mathura is located at a distance of 217 kms from Fatehgarh. The Chhapra Mathura express (15107) reaches Mathura from Fatehgarh railway station in about 4 hr 35 min journey.

Kannauj is located very close to Fatehgarh at a distance of 54 km. The city can be reached from Fatehgarh railway station through Kalindi express (14724) at a travelling duration of about 56 min. The city can be also reached through roadways in about one hour.